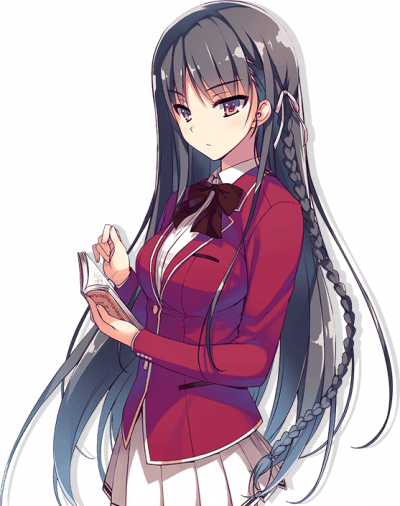 Suzune Horikita is one of the main characters of the You-Zitsu series and the main heroine of the √Horikita spin-off manga. She is known to be the younger sister of Manabu Horikita, the Student Council president of the school on the 1st Year Arc. She is currently a second-year student of Advanced Nurturing High School. At the start of the series, she was introduced as the class representative and a student of Class 1-D, seated at the rear row of the class, next to Kiyotaka Ayanokōji. Despite her academic ability, she was placed in D-Class due to her inability to work with others. Nevertheless, she strives for A-Class and will do anything to reach that goal. Suzune has long black hair with one braid tied with a pink bow as well as gradient red eyes. She is always seen with a stern look on her face. She has a slim but well-endowed body which makes her stand out as being beautiful, even attracting the attention of Ken Sudō and Kakeru Ryūen. She usually wears a standard school uniform. Outside of school, she wore a striped sundress and a sun hat. She was also seen wearing a white bikini by the pool and a red tracksuit as seen when the first-year level underwent the survival test. Suzune is a serious, intelligent girl who rarely displays any emotion and generally seems unfazed by most things, as proven when she remained unmoved after being threatened by a boy from Class 1-C. She comes off as a rather cold and distant person to her classmates due to lack of communication with them as well as her tendency to distance herself from them and to look down on them. Because of this attitude, she is openly honest about many things, which is shown when she admitted having no friends as she thinks that friends would only drag her down, but this began to change as the series progressed. Suzune possesses an antisocial outlook, which has led her to hardly talk to anyone except Kiyotaka Ayanokōji upon meeting him and to not trust anyone, especially those who tried to befriend her such as Kikyō Kushida. However, unlike Kiyotaka who initially wanted to make friends, she was the opposite of him as she disregarded it, thinking that it was nothing more than a distraction and only thought of getting promoted to the Class A. It is strongly suggested by Kiyotaka and her brother that her attitude and inability to work appropriately with people or her tendencies on focusing too much on her goal was the reason she was placed in Class D. Suzune is a hard person to convince, as she refused to accept that she was placed in the Class D and set a goal to ascend to a higher class. This goal, however, was refuted by her brother, who told her that she has no knowledge of her lack of character, which is substantially holding her back and should just leave school. She refused to believe that friends were needed to help her though she did convince Kiyotaka to assist in reaching her goal. When Kiyotaka pointed out that her isolation towards others could be why she was placed in Class D, she quickly denied it but appeared to briefly ponder it being a possibility. While she is generally composed, her fear truly surfaces when she is in the presence of her older brother, who is also the student council president. This is displayed when Suzune does indeed express a sensitive side of sorts towards some issues. She greatly admires her brother, but at the same time, feels inferior to him due to his accomplishments compared to her shortcomings. Suzune was shown to shake in fear of him, as seen in their secret meeting when he nearly attacked her in Episode 2. This was seen again in Episode 5, where she found herself unable to talk during Ken Sudō's hearing and was only able to snap out of it due to Kiyotaka's intervention. Despite her disdain and cold attitude, it appears she can be a caring person as displayed when she sacrificed 50,000 points to save Ken from being expelled after he failed a test. Suzune explained that she did so to further her own goals but this event and her previous attempts to help him study suggest otherwise. Later, Suzune also defended Ken's case, and while she did criticize him, she firmly declared him to be innocent in the incident. Suzune then displayed this attitude in Episode 7 where she was shown smiling after looking at the email Kiyotaka sent her. Due to the time they spent together, she came to trust Kiyotaka, as she made him one of the two boys in charge of guarding the boys' tent during the uninhabited island exam, after stating that she couldn't believe Yōsuke Hirata by himself. Her trust in Kiyotaka is also displayed by trusting him after discovering she was sick and unable to continue participating in the challenge. During the final days of the survival test, Suzune appeared to have grown in character as she came to acknowledge the hypocrisy of her previous views of Class D as she realized her actions were the same as that of Class C during her fight with Mio. After she was taken down by Mio and found by Kiyotaka, she finally admitted that she needed allies. Once the survival test was over, in the anime, she thanked Kiyotaka for his help in gaining Class D' trust after giving the credit of their victory in the island challenge to her. This time, she displayed a rare moment of affection, as she was both flustered and shy in thanking him while unable to look him consistently in the eye.