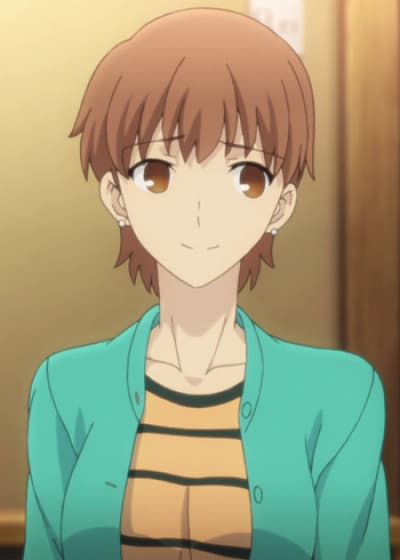 Taiga Fujimura is an English teacher at Shirou's school, homeroom instructor of Shirou's class and the supervising teacher for the Archery Dojo. Taiga is a twenty-four-years-old woman with short light brown hair and eyes. She wears a green dress with a yellow and black stripe shirt and white shoes. Her three measurements are unknown but it is said that she is less than Rider but greater than Saber. In Heaven's Feel true end, everybody else has grown up and matured, but Taiga is the same as ever. It seems like she has not aged a day since twenty. She is widely called "Tiger", a nickname she dislikes as "Taiga" and "Tiger" sound similar in Japanese. She hates the fact that her name is Taiga, and if you call her Tiger she will get mad and cry. Taiga is irresponsible, clumsy, and prone to sporadic bouts of extreme lethargy or zest. Although flawed, she is bright, cheerful and always bring laughter to others. Due to being born into the Fujimura Group, it was these people and their anything-goes attitude that caused Taiga to turn out the way she did. Taiga is a cheerful woman who's always showing her bright, yet childish side. She is really affectionate towards Shirou and Kiritsugu. She's always ready to help the former and she's always trying to give him good suggestions, especially on people he meets and those who're strictly involved with him. When she was a student, she developed a crush on Kiritsugu and it was something like love at first sight. Taiga and Shirou are very close, and she regards him as a younger brother. When she first met Shirou, she would always end up quarreling with him when she came over. Eventually, though, they made up, and settled into their current relationship. Shirou refers to her as "Fuji-nee". Her primary goal in life is to kick back and take it easy at Shirou's house. Thanks to Waver Velvet and Rider interaction during in the Fourth Holy Grail War, she found that communicating with people is really important. But it was thanks to Kiritsugu's influence that she learnt English from his private lessons, which led to her finally pursuing her job as an English teacher. She's very proud of her abilities and she think she's one of the best kendo practitioners of the town. She only acknowledges others through a kendo match, such as in the case of Saber. Taiga is a very nice and protective person although she loses her cool pretty easily. She can't cook at all and that's why she always sticks to Shirou's house at dinner or lunch time, trying to get food made by either Shirou or Sakura, the latter whom she has a very high opinion of. Taiga barely accepts Saber's presence at Shirou's house, but she's easily convinced she could be a good guardian for him. According to Kiritsugu, Taiga is similar to Shirley.